Cost Optimize NGINX Plus with Amazon EC2 A1

Amazon EC2 A1 instances deliver up to 45% cost savings for Arm-native and modern scale-out applications such as web servers, containerized microservices, caching fleets, and distributed data stores that are supported by the extensive Arm ecosystem. These instances also appeal to developers, enthusiasts, and educators across the Arm community as they provide quick, easy and cost-effective access to the Arm architecture using familiar EC2 cloud interfaces.

NGINX is one of the most popular scale-out web applications and is well suited to running on Amazon EC2 A1 instances. NGINX Plus is based on NGINX Open Source, which is the #1 web server at the world’s busiest 1,000, 10,000, and 100,000 websites, according to W3Techs. The commercially supported version NGINX Plus for Arm is readily available on the AWS Marketplace, including a free trial, making it very easy to get up and running on A1 instances. 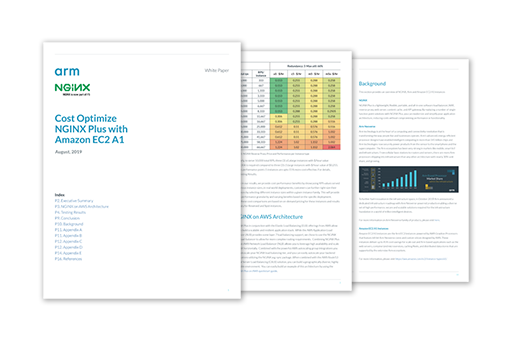 In this document, we showcase the cost and performance benefits of deploying NGINX Plus application delivery and web services on Amazon EC2 A1 instances. In our performance testing, we focused on NGINX configured as a reverse proxy server and as an API gateway. The host infrastructure is configured in a redundant manner that replicates a typical production deployment, and then load tested across a range of total requests per second.