Just a few days ago, Arm celebrated its 30th anniversary creating an opportunity for us to reflect on many milestones and pivotal moments across the industry. There is one thing that stands out to me in this time of reflection and it is that the Arm ecosystem is powerful, and our ongoing collaboration with AWS is a great testament to this.

In 2015, AWS purchased Annapurna Labs, one of the pioneers in creating Arm-based silicon for hyperscale data centers and the edge. In 2017, AWS introduced Nitro, a new service for offloading networking, storage and security tasks onto an Arm-based, Annapurna-designed board. Nitro is now used extensively across AWS.

And in 2018, we saw the debut of Graviton, AWS’s first Arm Neoverse-based processor for general purpose application workloads which was followed by Graviton2, announced last year, offering 7x the compute performance over the first-generation Graviton processor.

The phrase “time flies” is particularly meaningful when I think about this work with Annapurna Labs and AWS. Only five years ago AWS welcomed Annapurna Labs to the family and today, more and more customers are leveraging the price performance- benefits of the world-class Arm-based processor known as Graviton2.

This is a small sample of the success AWS has seen with Graviton2-powered instances, and it is big proof of the efficiency of the Neoverse N1 design (and in fact, you can expect to hear more soon about how Arm is running some of its own internal workloads on Amazon EC2 instances!). These customer success stories parallel significant advancements made in the Arm software ecosystem supported in AWS. This includes support we’re seeing across the ecosystem from leading Linux distributions, Docker, Kubernetes container services, plus a wide range of developer tools, software and monitoring agents.

Just last week AWS added more to its Arm-based Graviton2-powered instances portfolio with the C6gn network-optimized instances delivering up to 100Gbps network bandwidth and up to 40% better price/performance relative to the current generation x86-based network optimized instances. These new instances are designed for workloads such as HPC, network appliance, real-time video communications, and data analytics that can take advantage of improved network bandwidth and packet processing performance, each of which are now 4x higher than the current generation network optimized instances. The EC2 C6gn instances will be available later this month. 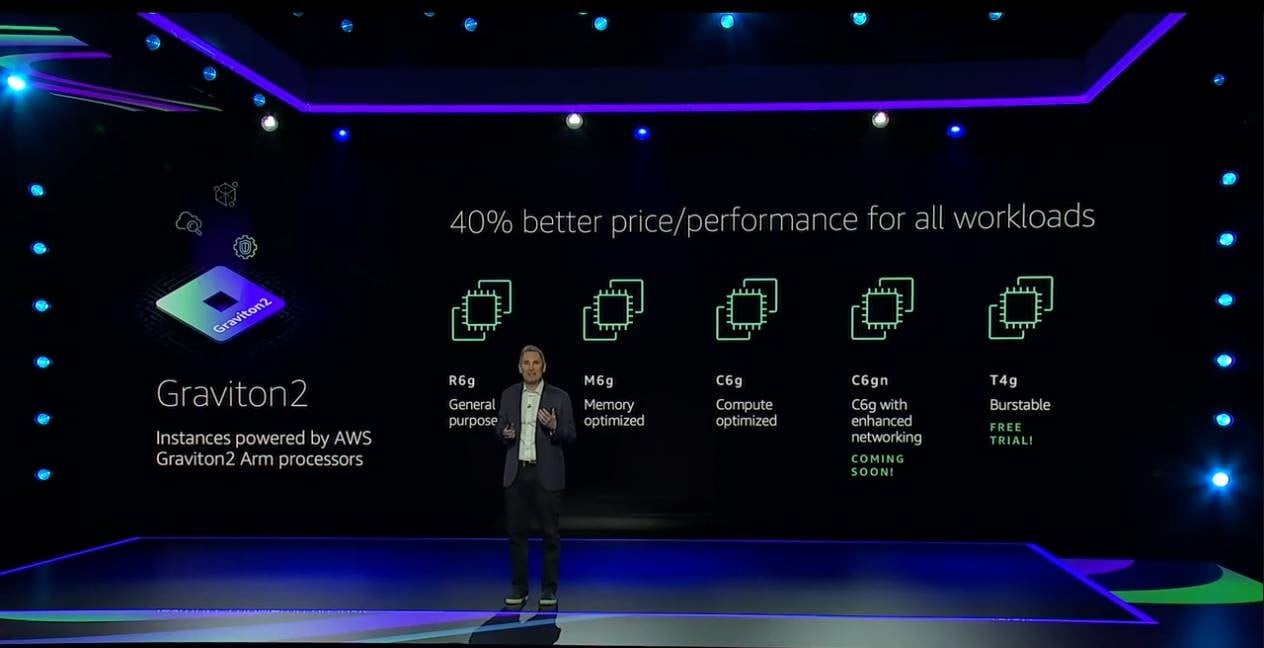 Also new last week, AWS added Graviton2 CPUs to their AWS Outpost offering. More specifically, these will be 64 vCPU, 1U, 24” short-depth, low-power servers that should be an ideal fit for their targeted use cases – supporting on-prem compute in power and space constrained telco, manufacturing, retail and hospital locations. The addition of Graviton2 to AWS Outpost demonstrates the quick maturation of Arm Neoverse solutions into mainstream use cases and we’re excited about the possibilities it represents.

Our close collaboration with AWS has surfaced a change we see coming over the next decade and across many cloud providers; a stronger desire for custom silicon in addition to the traditional semiconductor model. This shift is due to insatiable workload demand, lack of Moore’s Law scaling, and the competitive pressure to deliver more differentiated services with greater customer value. Because there is no one-size-fits all approach to computing, it remains important that Arm continues to leverage its unique business model to allow for flexibility so our partners can obtain the right level of performance at the best power efficiency for their applications and workloads. The growing portfolio of Graviton2 EC2 instances are proof of that growth and continued effort to enable the evolving infrastructure.

At Arm, the responsibility to enable our ecosystem with the right compute for the right applications remains the North Star for Neoverse designs. AWS has opened doors for what cloud-optimized compute can do in powering a world of a trillion devices, and we are proud to be part of this collaborative journey that is really just beginning.

Over the next couple weeks of AWS re:Invent 2020, you will hear more about how customers are innovating on Graviton2, including talks from customers like Snap Inc. on the benefits of migrating to Arm-based Graviton2 instances (Dec. 17 starting at 8:00am PDT). Later this week, you can catch a general session which goes into detail on AWS Graviton2 -powered EC2 instances (Dec. 10 at 10:15am PDT) and the journey to silicon innovation at AWS (Dec. 16 at 1:30pm PDT).

Arm technology is at the heart of a computing and data revolution that is transforming the way people live and businesses operate. Our energy-efficient processor designs and software platforms have enabled advanced computing in more than 190 billion chips and our technologies securely power products from the sensor to the smartphone and the supercomputer. Together with 1,000+ technology partners we are at the forefront of designing, securing and managing all areas of AI-enhanced connected compute from the chip to the cloud.