Based on my conversations with automakers and tier-one automotive suppliers, it’s clear there are increasing demands from consumers for a smartphone-like experience in their vehicles. In fact, despite the current economic climate, the demand to deliver new innovations and to power more displays inside the vehicle, from mirror replacement to head-up displays, remains unchanged.

These requirements for a more immersive in-vehicle, smartphone-like experience put Arm in a unique position. As the leader in both digital cockpit solutions and smartphones (85 percent of in-vehicle infotainment (IVI) solutions and 99 percent of the world’s smartphones are Arm-based), Arm applies its combined expertise in both applications into its Arm Mali graphics processor units (GPUs). And as the industry’s number one shipping graphics IP, Mali GPUs are also the world’s most ubiquitous graphics processor.

With demand for more in-vehicle displays increasing, then naturally the opportunity for more advanced applications to run on those displays increases. To ensure Arm’s extensive ecosystem can address these demands, Arm is releasing a new version of its Arm Mali Driver Development Kit (DDK) to support the key requirements of digital cockpit use-cases alongside Mali GPUs. Arm’s success in enabling seamless graphics across a variety of screens means Mali GPUs and Mali DDK solutions are built to power key in-vehicle capabilities of next-generation vehicles.

What’s particularly rewarding about my role as a leader in Arm’s automotive business is seeing carmakers bring Arm-based in-vehicle experiences to life. A recent example being Audi who are using a single Arm-based Samsung Exynos v9 SoC, powered not only by 8 powerful Cortex-A76 CPUs, but crucially also by several Mali-G76 GPUs shared between multiple workloads to enable a number of graphically-rich applications across the dashboard.

The nuts and bolts 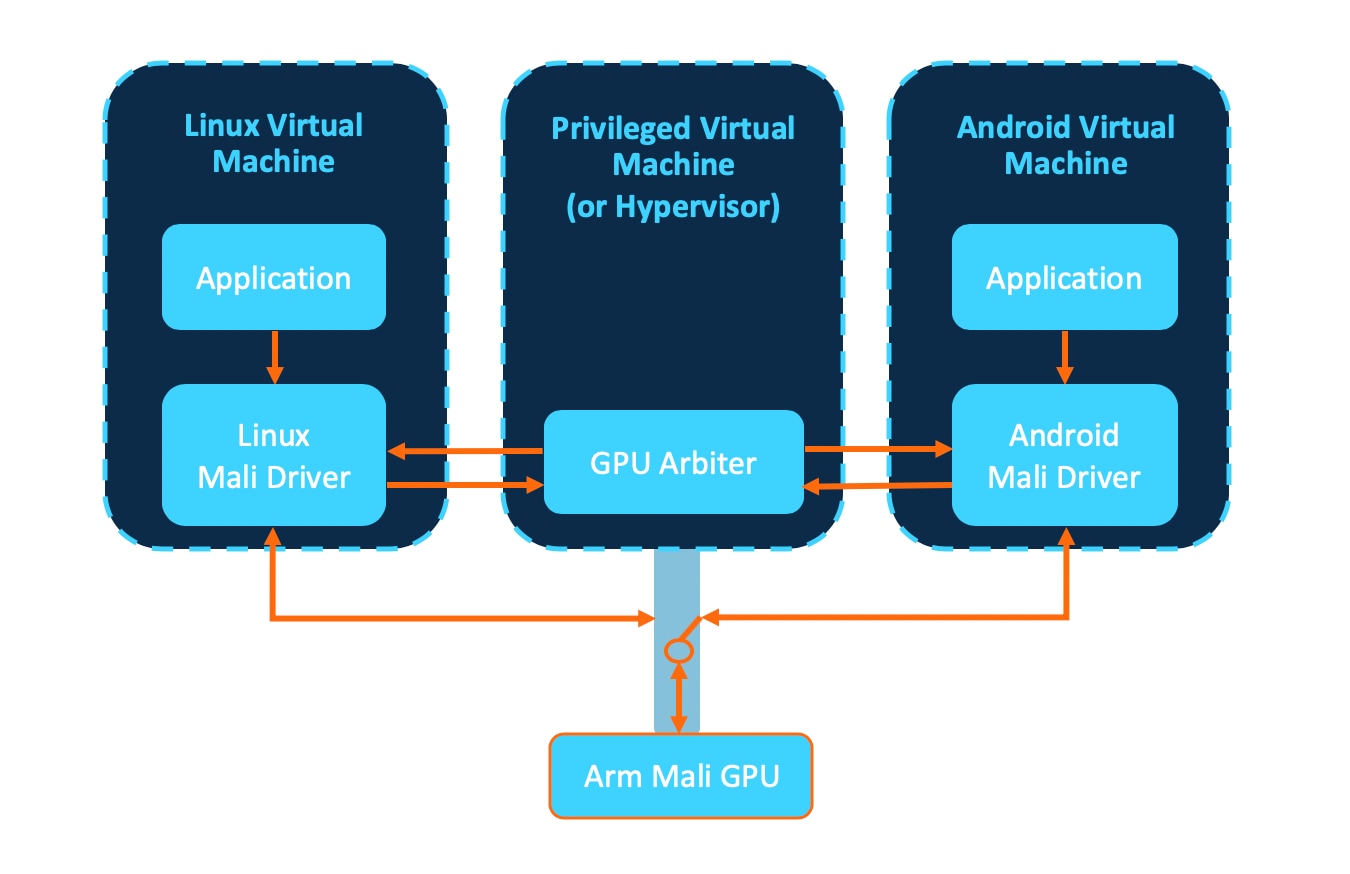 Software controlled GPU virtualization. The GPU arbiter acts as a gatekeeper, ensuring each Virtual Machine gets direct and isolated access to GPU resources.

The crux of this new approach is to enable in-vehicle graphics on cockpit domain controllers. A domain controller allows multiple electronic control units (ECUs) to be consolidated into a single ECU, often with a single SoC. Previously a single ECU may perform one function, such as a digital instrument cluster showing driver speed and warning lights, while now a cockpit domain controller is able to perform multiple functions by flexibly allocating resources to multiple workloads from a single SoC. For example, a single SoC using the Mali DDK can allocate compute resources to the instrument cluster, IVI, and navigation system rather than requiring one SoC or ECU per application.

The Mali DDK supports Linux and Android, and the virtualization features can be used across multiple operating systems and hypervisors ensuring a smooth user experience such as fast touch-screen response-times in virtualized systems. Additionally, Arm support for Mali GPUs and Mali DDK in automotive applications will be tailored to the market needs to aid in the software maintenance for the lifespan of the vehicle.

The automotive industry is in the midst of delivering a faster speed of innovation than it ever has in order to keep pace with consumer expectations, and this is why the Arm automotive ecosystem has never been more vital. The Arm ecosystem has become the world’s leading compute ecosystem by enabling the demanding expectations consumers have of applications, including this exciting opportunity in immersive in-car experiences.

Arm technology is at the heart of a computing and data revolution that is transforming the way people live and businesses operate. Our energy-efficient processor designs and software platforms have enabled advanced computing in more than 180 billion chips and our technologies securely power products from the sensor to the smartphone and the supercomputer. Together with 1,000+ technology partners we are at the forefront of designing, securing and managing all areas of AI-enhanced connected compute from the chip to the cloud.