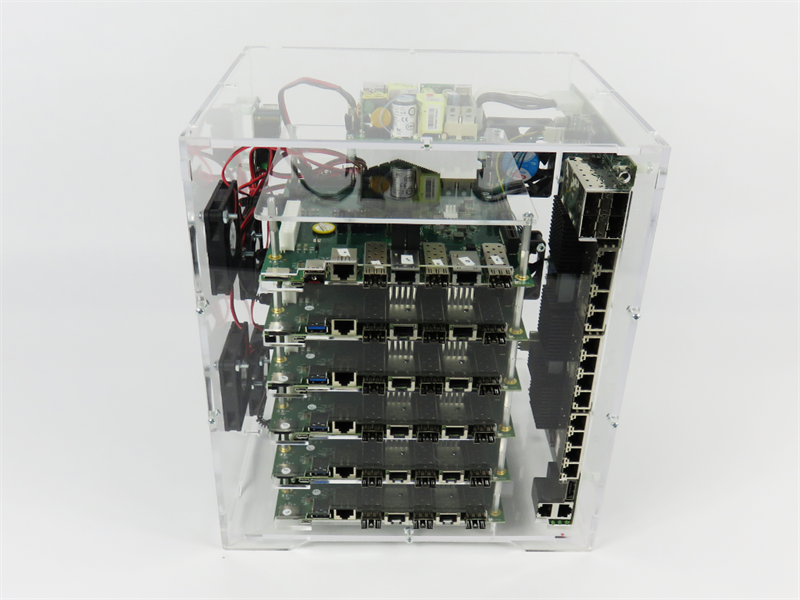 Enea® (NASDAQ OMX Nordic:ENEA), ARM, Marvell, and PicoCluster today announced they have collaborated to develop a new platform for accelerating the development of ARM®-based network functions virtualization (NFV) software, the NFV PicoPod. The NFV PicoPod is the world’s most compact OPNFV development environment that is compliant with the OPNFV Pharos specification. The NFV PicoPod will be demonstrated for the first time at the OPNFV Summit in Beijing, June 14-15.

The NFV PicoPod is a complete, cost-effective OPNFV Pharos pod, dramatically condensed to a cubic foot package, consisting of six Marvell MACCHIATObin™ developer boards powered by System-on-Chip devices (SoCs) based on the ARMv8-A architecture. The single PicoCluster encasement also includes a power supply and a Marvell® Prestera® DX Ethernet switch. The system runs the latest OPNFV Danube software release for ARM, which has been integrated by Enea.

Enea is a committed contributor to the OPNFV community and hosts the first ARM-based Pharos Lab, enabling cross-platform flexibility and architectural choice to the ecosystem. Enea’s OPNFV Danube integration delivers an NFV-ready infrastructure configuration perfect for the NFV PicoPod platform for VNF development and verification.

“It has been a pleasure working with ARM, Marvell, and PicoCluster in making the NFV PicoPod, and it is a great complement to a full Pharos Lab for certain aspects of NFV software development,” said Karl Mörner, SVP Product Management, Enea. “The NFV PicoPod is a highly anticipated aid in Enea’s own focus on network edge and customer premise applications, where ARM-based hardware has a natural fit. The Pod’s demo and test capabilities will prove themselves valuable in Enea’s pursuit of a virtualized network edge.”

The Marvell MACCHIOATObin board ( http://blogs.marvell.com/2017/06/community-platform-allows-easy-adoption-of-arm-64-bit-in-data-center-networking-and-storage-ecosystems/ ) is a cost-effective, high-performance networking platform targeting ARM-based NFV ecosystem communities. Based on a quad-core configuration of the ARM Cortex-A72 processor ( https://www.arm.com/products/processors/cortex-a/cortex-a72-processor.php ), the ARMADA® 8040 SoC powers the Marvell MACCHIOATObin board, and supports the latest open developer standards including OpenDataPlane (ODP), Data Plane Development Kit (DPDK) and OpenFastPath (OFP).

“Our latest collaboration milestone utilizes the collective know-how of ARM, Enea, Marvell and PicoCluster, putting a data center on a desktop into the hands of NFV developers at an unmatched price point,” said Noel Hurley, vice president and general manager, Business Segments Group, ARM. “The power efficiency, scalability, and TCO advantages of the ARM architecture are only meaningful if we make investments in our developer ecosystem. Only through ongoing collaboration and investing in all of the tools required by developers can we expand the realm of what’s possible for next-generation networks.”

“Collaborating with ARM, Enea and PicoCluster allowed us to create a compact and converged compute and networking modular system,” said Michael Zimmerman, VP and GM, Networking Group at Marvell Semiconductor, Inc. “The transition to edge computing and networking force new modular configurations that can scale from 4 to 24 cores and beyond. Using the Marvell MACCHIATObin board and Open API Prestera DX Ethernet switch provides the community with an ARM 64-bit NFV development platform. Marvell’s ARMADA multicore ARM-based portfolio combined with Marvell’s Open API Prestera DX switch and Alaska® PHY families are designed for scalability, from 1GbE to 25GbE, enabling modular edge computing and networking.”

“NFV PicoPod is really the start of something new,” said Craig Brown, CEO of PicoCluster. “Never before have you been able to have this kind of compute and network power in such a compact and power efficient format. It is literally a data center on the desktop. There is nothing else like this anywhere. It's been great working with ARM, Marvell and Enea on building an accessible ARM-based Pharos cluster for VNF development and verification.”

Pre-orders are currently available at https://www.picocluster.com/products/nfv-picopod .

Enea is a global supplier of network software platforms and world class services, with a vision of helping customers develop amazing functions in a connected society. We are committed to working together with customers and leading hardware vendors as a key contributor in the open source community, developing and hardening optimal software solutions. Every day, more than three billion people around the globe rely on our technologies in a wide range of applications in multiple verticals – from Telecom and Automotive, to Medical and Avionics. We have offices in Europe, North America and Asia, and are listed on NASDAQ OMX Nordic Exchange Stockholm AB. Discover more at www.enea.com and start a conversation at info@enea.com .

PicoCluster is a global supplier of Desktop and Micro Data Centers. We focus on building compact and capable devices for desktop development and edge deployment. A key differentiator is in being able to deliver fully configured systems for Big Data, NoSQL, container sytems like Docker and Kubernetes, as well as high performance OPNFV, OFP, and other open, network-focused technologies. See more of our offerings including NFV Pico-Pod at www.picocluster.com or contact us directly atinfo@picocluster.com .