The Fifth Wave of Computing Is Built on AI, 5G and a Secure IoT 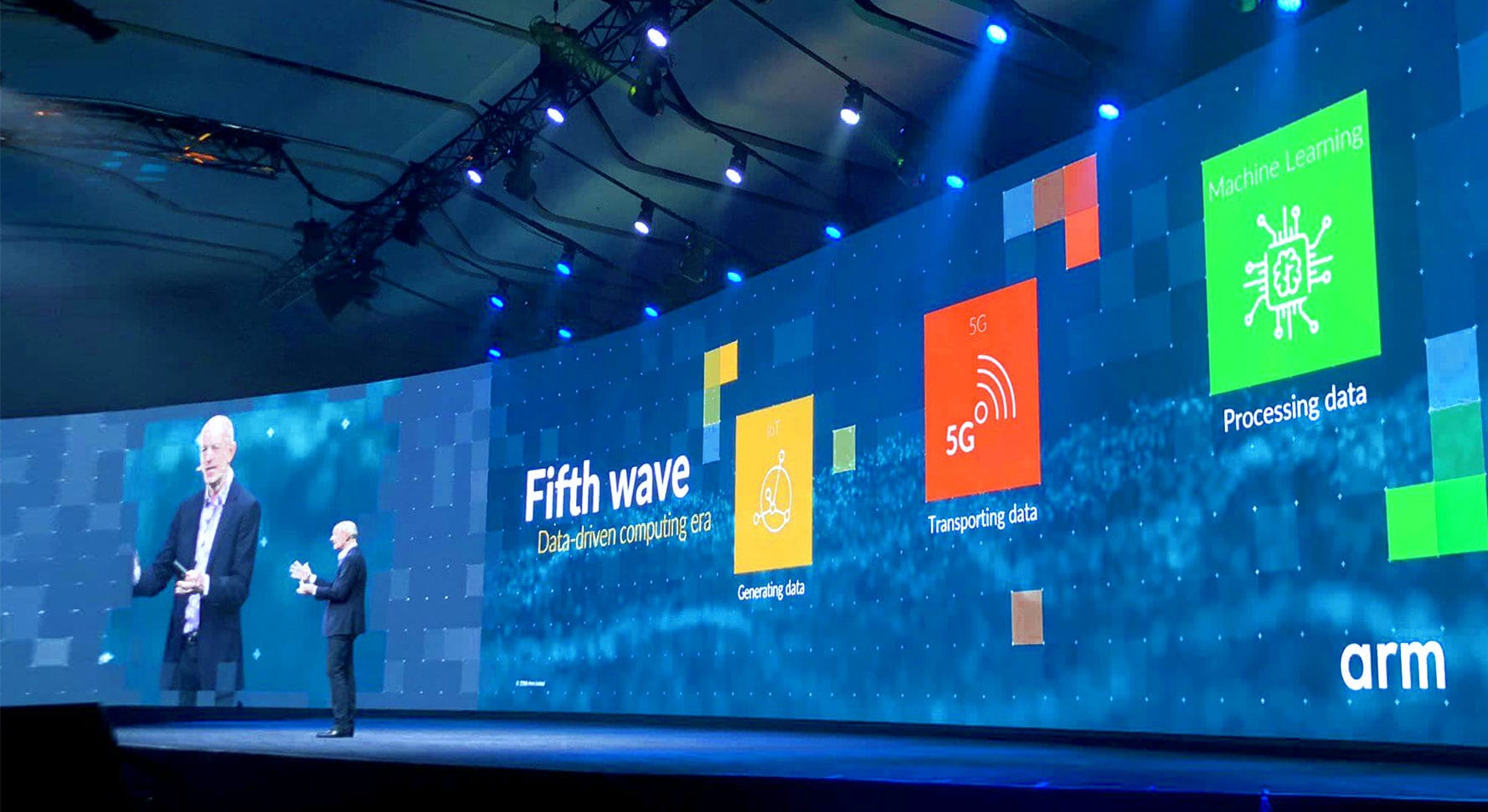 Emerging technologies are often portrayed as the ‘next big thing’ long before they’re able to prove it. We’re shown solutions to problems we hadn’t realized we had in a bid to persuade us that our world will be changed for the better, but all too often hype doesn’t live up to reality. The result is that many people become skeptical of new technology.

Until relatively recently that scepticism applied in spades to artificial intelligence (AI). It was a great movie story but what were the everyday applications for AI technology, short of a robot butler? Similarly, fifth generation or 5G infrastructure has been such a long time coming that it’s in danger of becoming a victim of its own hype – and from a consumer perspective, just another ploy to get you to pay more. Then there’s the Internet of things (IoT) – often reduced to something that will at best enable your refrigerator to order milk for you. I understand where the skepticism comes from, but the judgements vastly underestimate all three technologies.

While AI, 5G and the IoT were always bound to succeed in my view, something hugely positive is happening as a result of these technologies reaching maturity at the same time. Like three kids growing up together, they’re feeding off each other’s energy and enhancing each other’s impact on the world. It’s this union, far greater than the sum of its parts, that I call the Fifth Wave of Computing.

Why the fifth? We’ve already had four distinct waves that each changed the computing landscape forever. It began with the mainframe, then with a computer in every home, then the Internet and more recently mobile computing and the cloud. This time, though, it’s not one single technology – it’s the convergence of three.

Let’s start with the role that AI plays.

When I was a student, some 30 years ago, artificial intelligence (AI) seemed like dark magic. It took until the 2010s for mainstream compute technology to catch up and enable what had been promised. Now AI algorithms run on processors in billions of devices used by consumers every day, and also in the cloud.

You can read more about specific use cases in this recently published report by GigaOm: AI at the Edge. More generally, data from analysts IDC suggests there were more than 300 million AI-capable devices operational in 2017 and I expect real-world AI to accelerate as CPUs and MCUs become even more AI-capable and new specialized AI processors emerge.

One excellent example of what is now possible is the Amiko Respiro asthma inhaler. The device, running AI on a low-power Arm Cortex-M processor that costs less than a barista coffee, precisely measures drug inhalation and uses AI and software to measure and improve respiratory therapies. As someone who suffered from childhood asthma, I know exactly how useful Respiro can be. And, given asthma still kills 250,000 people a year, devices like this can’t come soon enough.

AI enhances the Internet of things

AI-enabled computing is also benefiting AI’s sibling in the Fifth Wave of Computing, the Internet of things (IoT). IoT technology in its ultimate form will consist of a global network of securely managed devices woven into the fabric of our world; in essence a fertile field with data as the crop. Each secure IoT device will gather information that will then be processed to gain insights that in turn will lead to new actions and knowledge.

Thanks to slimmed-down algorithms and enhanced embedded compute capabilities, devices will become far more capable of processing data ‘at the edge’ (the edge in this case being the device itself, rather than servers deployed at the edge of the network) – workloads that today would require data to be moved across the internet and processed within a datacenter.

This will enable data to be processed with greater efficiencies throughout the IoT, but the real prize is the impact it will have on our daily lives. In agriculture, for example, local AI processing could result in far more precise deployments of fertilizers and pest controls, minimize the use of water and enable optimal harvesting. Fresher, safer food produced with minimal environmental impact.

That’s one example, but similar efficiencies will be gained across so many industry verticals, particularly retail, transport and logistics, utilities and energy.

Many of the Fifth Wave of Computing’s benefits to healthcare will come at a device level – we’re likely to see handheld smart devices such as the Amiko Respiro become a whole lot less reliant on mobile devices and the cloud. In Western society, that’s a bonus. In remote parts of the world without access to constant power or Internet connectivity, it’s potentially a life-saving step.

There’s also an inherent security benefit to retaining personal data on the device rather than sending it to potentially insecure locations on a network. However, that’s by no means an invitation for chip designers to be complacent – security and privacy must be designed in to a system from the start, from chip to cloud.

This is a critical design factor for everyone building products and systems for the Fifth Wave of Computing. Security is everyone’s responsibility, and a fundamental prerequisite of a trusted IoT.

On-device AI will have a transformative effect on technology

There will also be a host of new IoT applications fundamentally enabled by the addition of local AI. Perhaps the largest single IoT device any of us might hope to own is an autonomous vehicle (AV), or self-driving car. But this dream lives or dies on the vehicle’s ability to intelligently process data from multiple sensors in order to make split-second decisions in real time.

The volume of data generated by a single fully-autonomous (‘level 5’) vehicle could be more than 11 terabytes per day, according to industry estimates – equivalent to the data stream of 100 4K movies. No wonder, then, that in its 2019 report “Autonomous Vehicles: Prototype to Production”, Forrester highlights that the biggest roadblock for developers of self-driving cars is a combination of hardware compute power and capability needs including efficiency, size, and processing speed.

The report also suggests that automotive engineers think it will take another decade before we see mass deployment of autonomous vehicles. That gives us a 10-year window in which to design and perfect a computer capable of powerful local AI processing while remaining small and low power enough to be deployed at scale.

From logistics to emergency management, every second counts – and mission-critical or life-saving decisions must be made based on real-time patterns in data

Yet the decision whether to process data on device or not isn’t always as simple as throwing power at the problem. There will always be a need to transmit large amounts of information at speed and over distance as in many cases, real insights comes when we look for patterns in individual events.

Returning once more to our Respiro inhaler, a sudden spike in activity within a certain geographic area might be mapped against air pollution or pollen count data to provide valuable insight into what triggers attacks or even issue an alert to users to stay indoors.

In other use cases, data has an even shorter shelf life. From logistics to emergency management, every second counts – and mission-critical or life-saving decisions must be made based on real-time patterns in data. In order to provide the instant 1000-foot view required, the infrastructure must be able to deliver.

And that’s where the final Fifth Wave family member, 5G networks, comes in.

5G gives an AI-enabled IoT the speed it needs

Like AI, 5G infrastructure opens up a new breed of previously-impossible applications within the IoT. But while AI enables insight from mass data, these applications will rely on 5G’s super-fast bandwidth, virtually zero latency and rock-solid reliability to provide access to that data.

We saw the seeds of that at Mobile World Congress 2019 with live-streamed sports games allowing event delegates to choose from more than 100 camera angles with instant switching. The upgrade in network data capacity required for this sort of widely-deployed service dwarfs what previous generation networks could deal with.

Beyond entertainment, we’ll see all sorts of businesses taking advantage of the super-responsiveness of 5G networks in combination with other Fifth Wave of Computing technologies. Applications requiring huge payloads of data to be transmitted and processed in milliseconds and with a high degree of reliability will become possible.

But while AI, the IoT and 5G are still emergent technologies, we don’t have to wait for them to fully mature before we reap the benefits. Arm is partnering with technology pioneers all over the world who see the potential in the Fifth Wave of Computing and are making first moves.

Companies like EDMI and KEPCO, both using Arm technology to build and manage intelligent grids of smart meters in order to optimize energy consumption. And mobile operators like Vodafone and Sprint, who we’re working with to dramatically reduce complexity when deploying IoT devices over mobile networks through a combination of iSIM, IoT software and network services.

In its entirety, the Fifth Wave of Computing stretches our imagination. On-tap access to intelligent, data-driven insight will not only drive efficiencies in industry but those efficiencies necessary to cope with the next century’s societal challenges, too.

We founded the 2030Vision, a cross-sector collaboration designed to foster innovation that supports the UN Global Goals, for this very purpose. It’s my hope that the Fifth Wave of Computing plays a fundamental role in realizing this vision – making cities, healthcare, transportation, manufacturing and agriculture smarter, more efficient and more sustainable.

Until that time, we must explore the links between the core technologies – AI, 5G and the IoT – and work out how they can be mutually supportive. We must also think carefully about the infrastructure the Fifth Wave of Computing needs so there’s a solid base for future growth. Non-negotiables in building that infrastructure must be flexibility, security, privacy and efficiency.

So, while we may not be standing at full height on our Fifth Wave surfboard yet, we’re already seeing what a combination of AI, secure IoT and 5G can bring. An exciting future awaits.

Learn more about how artificial intelligence (AI), 5G infrastructure and the Internet of Things (IoT) will enable a sustainable, secure and data-rich future.