Virtual reality and augmented reality are already adding value to healthcare, with 5G set to enhance the benefits 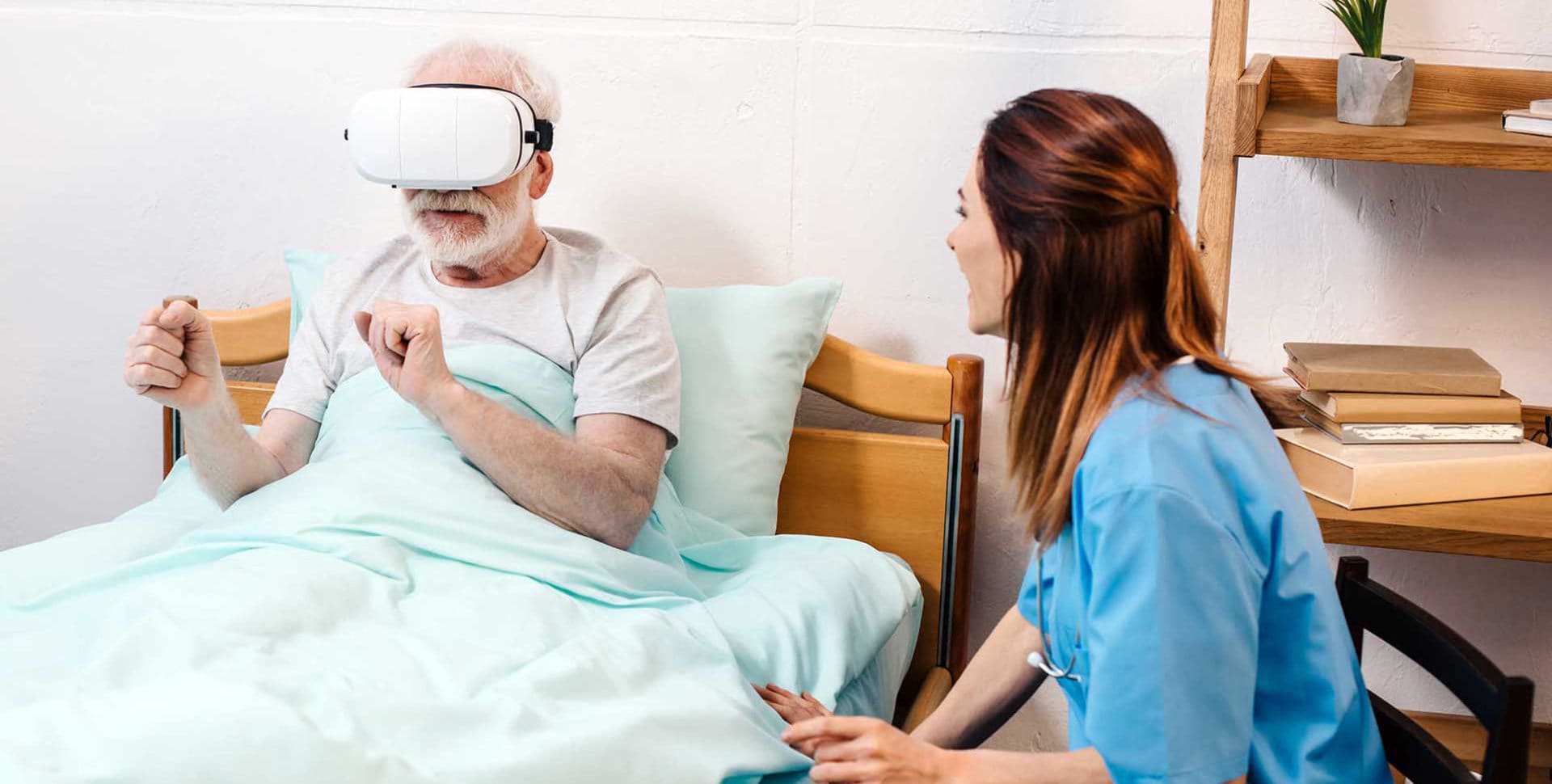 Despite still being in the early days of adoption, virtual reality (VR) and augmented reality (AR) are already having a transformative impact on healthcare technologies worldwide.

Virtual reality (VR) completely replaces a user’s view with a different scene, such as a video game or a film of a rollercoaster ride. Augmented reality (AR) differs in that rather than replacing the user’s view of the real world it enhances it by superimposing information or rendered 3D elements into the scene.

Both multimedia technologies – particularly VR – are leading to a range of positive impacts on the physical and mental health of patients. In turn, this is helping academic, medical and scientific professionals advance their understanding of various health conditions and diseases.

VR and AR smart devices are also already proving to be cheaper and more accessible in treating, curing and advancing understanding of illnesses, conditions and diseases compared to other treatments and technologies.

A report from Grand View Research, a market research and consulting company based in the U.S., states that the global healthcare market for VR and AR is expected to grow to an estimated $5.1 billion by 2025.

A contributing factor will be the 5G infrastructure rollout starting in 2019; connected VR and AR technologies typically have far higher bandwidth requirements than other forms of streamed content. 5G is likely to provide far more immediate experiences thanks to faster speeds and hyper capacity (between 5 and 20 Gbps).

The viewing experience will also improve thanks to 5G networks’ ability to deliver 8K, 360-degree video and interactive live streaming wirelessly to mobile technology such as smartphones and connected devices such as VR headsets. This will enable a far more vivid experience for health professionals during training, and when they treat and operate on patients. Meanwhile, the significant low-latency benefits of 5G can support real-time collaboration when advising and training fellow healthcare professionals or treating and diagnosing patients.

While we wait for the 5G rollout, let’s take a look at how VR and AR are already transforming healthcare worldwide…

VR is highly effective in pain management, as it acts as a diversion. Using the technology affects the brain’s neural pathways in the same way as real-life experiences, creating powerful memories that help patients forget about, or at least marginalize, the pain they are suffering.

Our ‘Made Possible by Arm’ video published last year told the remarkable story of Bob Jester who used VR to help reduce his pain medication following a life-changing accident. The video above reveals how VR has already lead to a 52 per cent reduction in pain among patients suffering from chronic pain.

Revolutionizing the training of surgeons

The training of medical professionals is an area where VR can add real value. The first “VR operation” performed at the Royal London Hospital in the UK involved the removal of a cancerous tissue using a VR camera. This allowed medical students to watch the operation ‘live’ instead of trying to catch a glimpse over a surgeon’s shoulders.

Moreover, an example of AR in surgery is Professor Shafi Ahmed, a colorectal surgeon at St Bartholomew’s Hospital in London (UK), who used a Microsoft’s HoloLens VR headset to virtually bring together surgeons worldwide to operate on a patient.

Each surgeon could ‘virtually see’ what Professor Ahmed was doing during the bowel cancer operation and could even more around as graphic avatars – standing and speaking as if they were actually in the operating theatre. With 5G infrastructure, this type of procedure is likely to be possible not only in a well-connected hospital theater but in the field, too.

Scientists from the Cancer Research UK Cambridge Institute (UK) have built a VR 3D model of cancer to provide a new way of looking at the disease. VR allows a cancerous tumour sample, taken from a patient, to be studied in detail and from all angles – with each individual cell mapped out. The idea behind the VR 3D model is to aid cancer researchers’ understanding of cancer and help find new treatments for the disease.

A paper in the Frontiers in Neurology journal states that VR has enormous potential to be used as part of the therapy treatment following a severe brain injury, both at the bedside and during daily life. VR is helping patients recovering from brain injuries cope with everyday tasks, such as shopping and making appointments.

The technology recreates these tasks within virtual environments. This allows patients to practice them at increasing levels of complexity, which helps them regain a higher level of cognitive function. These virtual environments can help doctors identify areas where patients are still experiencing difficulties, such as memory loss or the ability to make decisions.

The VR experience has been proven to help children with autism. As a result, the Office of Special Education and Programs in the U.S. Department of Education has announced $2.5 million towards a new program that aims to use VR to nurture the social skills of students with autism and other disabilities.

Meanwhile, in the UK, the Blue Room, an immersive VR technology developed by Newcastle University’s Institute of Neuroscience, helps those with autism overcome phobias through recreating real-world scenarios through VR. The technology has been such a success that it is now being offered through the UK’s NHS.

27 percent of patients with clinical depression are seeing clinical progress from using VR as part of their treatment. According to a study from University College London (UCL) and ICREA-University of Barcelona, a new type of VR therapy where depressed patients receive their own soothing words of comfort has been found to relieve symptoms of depression.

While embodied in an adult avatar, patients are trained to express compassion towards a distressed virtual child. They are then embodied in the virtual child and experience their own compassionate words and gestures. This form of VR therapy has led to patients involved in the study suffering reduced depressive symptoms.

Bravemind from the University of Southern California’s Institute of Creative Technologies is being used by clinicians to help veterans suffering from Post-traumatic stress disorder (PTSD). The VR tool uses virtual exposure therapy that gradually introduces patients to the things that trigger PTSD.

After initially imagining and looking at pictures related to the moments that caused the PTSD, patients are then put in managed stressful situations related to their particular condition through VR. This allows clinicians to create virtual experiences closely linked to real-life situations needed to help cure patients.

A treatment for phobias

VR has been proven to be an effective way of treating phobias. A study reported in the Lancet Psychiatry shows how using VR led to significant improvements in those suffering from a fear of heights. Half of the 100 adults in the study wore a VR headset for half an hour, three times a week for a fortnight, while the other half received no specific treatment.

The VR activity involved an avatar coach carrying out an assessment before inviting the individual to choose a floor of a virtual building and asking them to perform various activities involving heights, such as rescuing a cat from a tree. After the study, those using VR self-reported their fear of heights falling by around 70 per cent on average.

As a result, Alzheimer’s Society, based in the UK, has said it will fund a three-year research project using VR to try to detect early signs of Alzheimer’s disease in patients.

Identifying the early signs of schizophrenia

In 2017, researchers from the University of Exeter developed a VR-based “mirror game” that could help the early diagnosis of schizophrenia among patients. The game asks participants to duplicate the movements, gestures and facial expressions of a virtual avatar.

This was seen as an important breakthrough, as VR is far cheaper than traditional techniques for identifying schizophrenia, such as neuroimaging.

Crafting Arm’s vision, strategy, solutions and partnerships for the next wave of personal computing, Augmented Reality.