Right to Repair: The First Step Towards Tackling E-Waste

This Black Friday, Distinguished Engineer James Myers considers the impact Right to Repair could have on e-waste and why we need to swap ‘take-make-waste’ production models for more sustainable alternatives 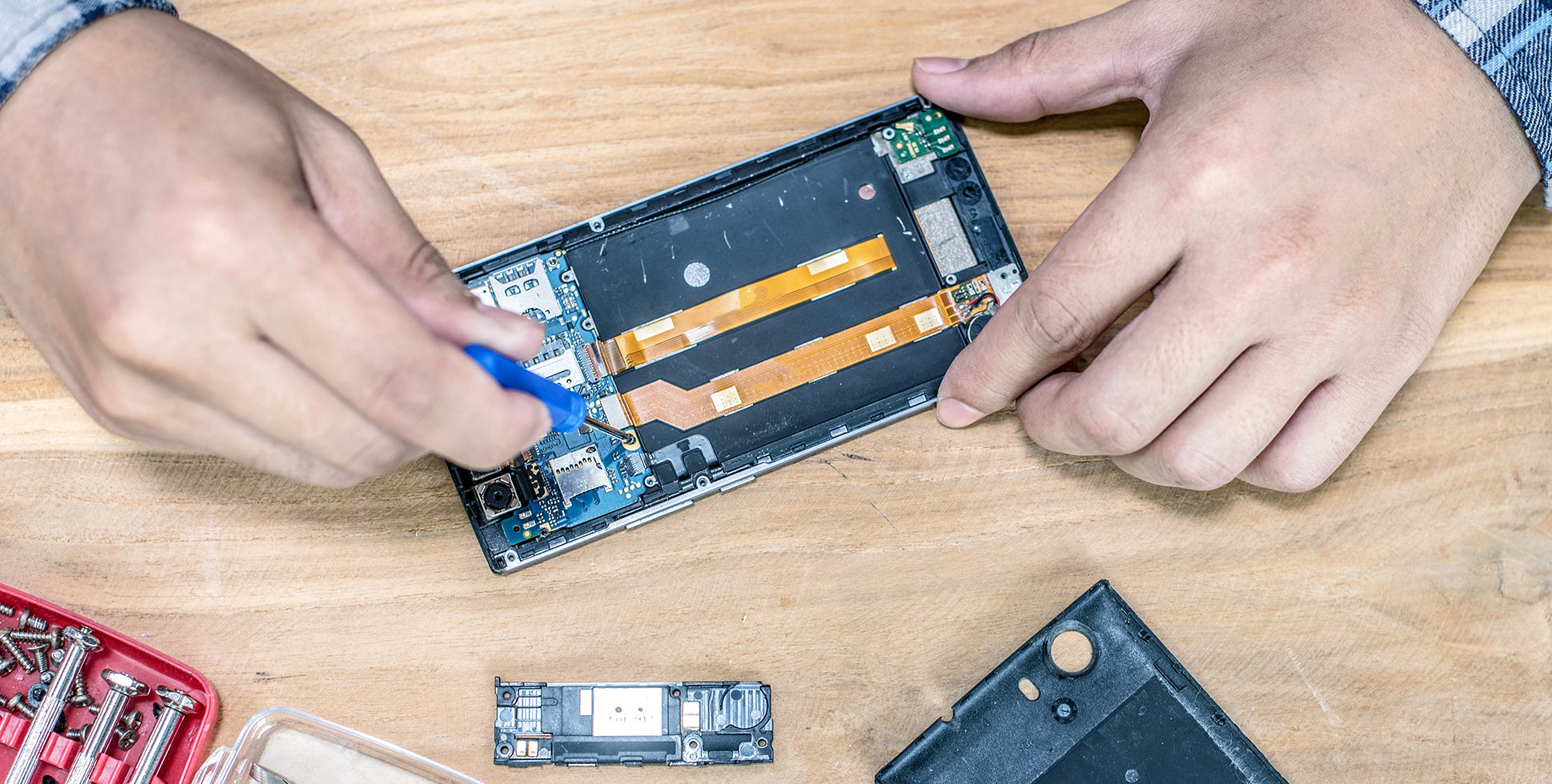 As retailers brace themselves for Black Friday – possibly the busiest day in the retail calendar – and consumers get ready to snap up countless discounted electronics, spare a thought for the discarded gadgets they’ll be replacing – and where they’ll end up.

This growing amount of e-waste is mainly fuelled by higher consumption rates of electronics, short lifecycles, and limited repair options – which is one of the reasons why Right to Repair legislation has been in the news lately. This time last year, the European Union introduced new rules giving consumers the right to repair appliances such as lighting, washing machines, dishwashers and fridges for at least 10 years. Shortly after, the U.S. issued a wide-reaching executive order encouraging the Federal Trade Commission to curb anticompetitive restrictions that limit third-party or self-repair.

This growing trend is good news for consumers, but how did we get to this point? Why do we need legislation to convince us to repair devices rather than junk them? And as a provider of foundational technology, what role can Arm realistically play?

Planned obsolescence – the policy of planning or designing a product with an artificially limited useful life – is often cited as the primary driver of e-waste. The practice originated in post-war America, where Bernard London’s 1932 pamphlet, Ending the Depression Through Planned Obsolescence, posited that building in obsolescence would stimulate the economy and encourage continuous purchasing.

While some original equipment manufacturers (OEMs) may still use planned obsolescence in this way, the accelerated evolution of chip manufacture over the last 50 years has also played its part. The rate of change has been so rapid that by the time gadgets broke, a newer, faster, cheaper and more efficient version was already available, so why waste time on repairs?

Device security can also be a factor. Older versions of software may contain unpatched security vulnerabilities, which could cause problems wherever sensitive information is handled, such as medical or banking apps. Understandably, OEMs don’t want to be blamed for security breaches, so obsolescence may be used as a strategy to reduce risk and prevent the proliferation of malware.

This is a sticking point – both for the consumer and for the environment – because otherwise-functional hardware may be rendered obsolete simply because it’s unable to support the latest software update. It’s not, however, an insurmountable problem.

Software updates have an important role to play in extending the life of devices, because they can act as a ‘repair’ function, patching security holes and fixing or removing bugs, as well as adding new features.

Proprietary software is, naturally, governed by the laws of supply and demand: while it’s still generating revenue – or is subsidized by the original device purchase – it makes sense to continue to support it. But once the cost of maintenance, testing and support outweighs that income, suppliers will typically decide that it’s no longer viable, and an end-of-life point is reached.

Open-source software (OSS) is typically cheaper and easier to maintain. Since it’s not dependent on any single creator – or the revenue it generates – it can continue to be developed by its users long after the original creator has moved on. And because it’s effectively tested and fixed by thousands of users, it has the potential to be more reliable. This can help extend the lifetime of devices way beyond initial manufacturer projections, as well as allowing them to be repurposed for completely new tasks.

(For the record, Arm is a keen supporter, contributor and user of open-source software (OSS). Our teams of engineers work to ensure all the foundational pieces of OSS – operating systems, libraries, tools and applications – are well supported on Arm systems.)

A frequent argument against the Right to Repair is that it will stifle innovation. Why should OEMs bother to invest in R&D if they’ll have to share their designs with third parties who could then use those insights to benefit their own products, without the upfront development costs?

Consider the car industry: no one would think it’s OK to completely replicate another manufacturer’s design… but equally, no one would junk their vehicle just because of a smashed windscreen or a blown tire. This is the Right to Repair in action.

In fact, some companies, such as Fairphone, already embody the ethos of Right to Repair, making it easy for consumers to buy, replace or upgrade components at will. But while a cracked phone screen may be easy enough to fix yourself, there are other replaceable components that rely on open documentation to ensure the job is done properly – and safely.

Availability of supporting documentation is key to repairing a device, as well as maintaining software. Its absence can be a major roadblock when repairing or adapting legacy hardware. And in case you’re wondering, Arm makes documentation available for hardware dating as far back as the mid-90s.

Right to Repair: Under the Hood

Arm doesn’t manufacture devices, but with 25 billion Arm-based chips deployed in 2020 alone, it’s safe to say that our technology goes into a huge amount of the devices we’re hoping to save from landfill. So, aside from providing documentation and supporting OSS, how can a foundational technology company impact the right to repair?

While it’s true that we can’t have a direct impact, we can support our partners in their efforts to tackle e-waste and extend device longevity in a number of ways.

Sustainable by Design: What’s Next?

There are clear signs that sustainability is taking a more prominent position on the tech industry’s agenda. Looking beyond the Right to Repair, initiatives such as imec’s Sustainable Semiconductor Technologies and Systems research program are focusing attention on the environmental impact of device manufacture. Counting Apple among its partners, it proposes environmental cost as a factor for consideration – alongside power, performance, area and financial cost – in the choices made throughout the semiconductor supply chain.

Although Arm doesn’t manufacture anything, and our technology is inherently low-power, helping to reduce energy consumption, we’re continually looking at ways to advance the sustainability of our next-generation IP. Our Research team has a dedicated workstream for sustainability innovation, resulting in projects such as Triffid, which provides compute by harvesting energy from its environment, eradicating the need for a user-replaceable power source where application performance is low and intermittent operation can be tolerated.

PlasticArm – a flexible processor based on an ultra-minimalist Arm Cortex-M0, with just 128 bytes of RAM and 456 bytes of ROM – could be used for smart life-cycle tracking, promoting sustainability by, for example, being used in the supply chain to help reduce food waste or identify packaging for recycling. While this is manufactured on a plastic substrate, the microns-thin film is expected to have a minimal recycling overhead when used to manage existing plastic packaging. And as plastics are replaced with bioplastics or other sustainable alternatives, we’re optimistic about future research pathways onto biodegradable substrates such as paper.

The Research team is also working with experts from the University of Southampton to explore the role Arm could play in a circular economy. How can we adapt our designs to facilitate an industry shift from the traditional ‘take-make-waste’ linear economy model, keeping resources in use for as long as possible? This work will consider a wide range of impact areas, from raw materials and manufacturing processes to supply chain and alternative business models. Stay tuned for updates!

Towards a Sustainable Future

As environmental concerns rise ever higher on the political and social agenda, e-waste will inevitably take an increasingly prominent role. The Right to Repair is just one of a raft of changes that need to happen if we’re to make a serious dent in those megatonnes of discarded electronics. New paradigms are inevitable, and with them will come new opportunities. Yes, consumers must do their bit, but the tech industry – from foundational technologists such as Arm, through component manufacturers, OEMs and distributors – has a huge role to play in ushering in a new era of sustainability and circularity.