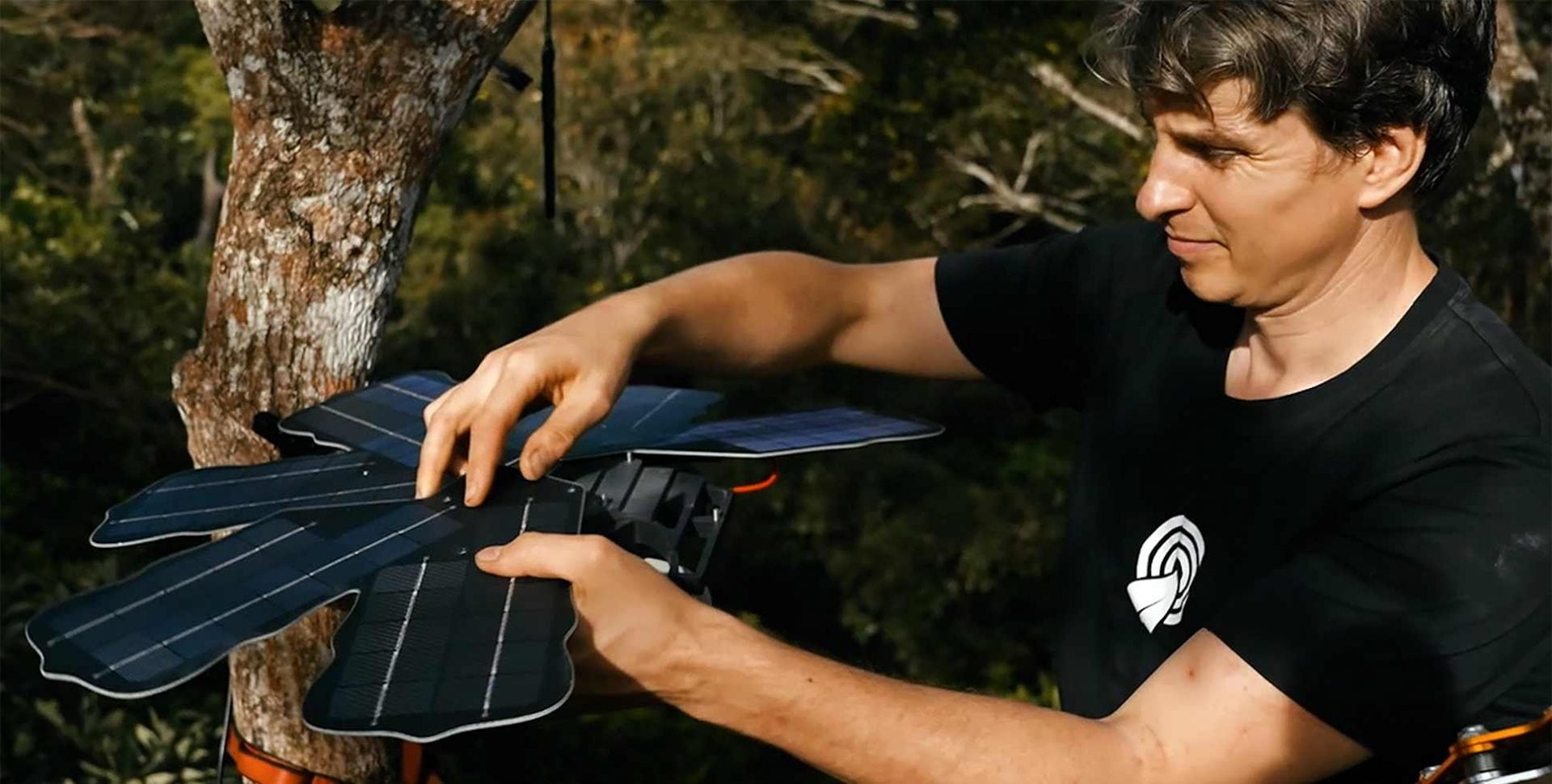 Growing up in San Francisco, environmental issues were part of the culture. But on an even larger scale, my generation came of age hearing constantly about ‘saving the rainforest.’ Truthfully though, I never totally understood what that meant. There was so much talk about the need, but never really the solution; the narrative didn’t seem to change from when I was a small child until much later.

But even with that influence, looking back, there’s isn’t much that stands out from that childhood — no obsession with the environment or anything like that — that would place me where I am today, which is scaling trees in rainforests around the world, creating and installing devices aimed at helping preserve these precious ecosystems. What I did love, though, was hacking things together.

While studying physics in college, there always seemed to be limitations to the equipment we had access to or the software we could use. Finding solutions and coming up with ways to build what I wanted based on what was available to me became my specialty. And that continues to be the case with my non-profit startup, Rainforest Connection.

Rainforest Connection: Where it all began

In 2011, I took a vacation and traveled to Borneo, Indonesia, to volunteer at a gibbon sanctuary for a few weeks. As it so happened, that sanctuary was spending a ton of time and resources trying to protect the outskirts of their small reserve from illegal logging. You could walk just a few hundred yards from the sanctuary and there could be someone cutting down trees with a chainsaw, but you’d never hear it over the cacophony of jungle sounds.

In fact, that’s exactly what happened while I was there, and it’s what inspired Rainforest Connection and our RFCx Guardian — a monitoring system that takes advantage of arguably the least utilized tool for protecting and understanding the natural environment: sound.

Shockingly, deforestation accounts for more greenhouse gas emissions than all of the world’s planes, trains, cars, trucks, and ships combined, and 90% of that deforestation is a product of illegal logging. With that in mind, our solution had to be simple, it had to be scalable, and it had to make use of what was available.

The tech behind the Guardian

For a long time, even before visiting Borneo, I'd been thinking about the Internet of Things (IoT) and what it meant to the world. Now I was thinking of what it meant to the planet. I took exception to the fact that so many people were trying to build brand-new hardware for IoT, and yet there were hundreds of millions of cell phones being thrown away each year in the U.S. alone, each equipped with the kind of powerful technology that is now helping us change the narrative from decades ago and actually save rainforests.

As I’m sure we all know, when it comes to mobile and Android technology, Arm’s influence is inescapable. I could have tried to create a device from scratch and build the whole board, but I realized I could go on eBay and pick up an old Android smartphone for $5. Powered by Arm chips, these smartphones already featured connected networks, could run incredible software, and had fantastic ecosystems.

Most importantly, these legacy smartphones are still plenty powerful enough to run endpoint AI: the GPUs built into them can run pretty advanced machine learning (ML) to identify sounds. Our software then decides whether the sound is of interest and then sends it to the cloud.

Along the way, my team and I are constantly learning all the ways our technology can be improved. While we’re trying to help fight climate change, we have our own battle with nature. Because, honestly, the rainforest is a terrible place to put an electronic device. It’s brutally hot, the sun is as dangerous to our devices as it is necessary to power them, and termites will deconstruct everything they possibly can just for fun. But even as these devices are changed to fit different habitats, the Arm-powered Android technology they run on is constant.

Arm technology allows us to pick up all the sound of the forest 24 hours a day, package it up, and send it up into the cloud over any network that’s available, where we then use AI to analyze it for any number of things. It plays a vital role in this constant connection between us and the rainforest and allows us to alert rangers of environmental threats in real time.

There is no solution to climate change unless we protect rainforests. That doesn’t mean that we regrow what we’ve lost. That doesn’t mean we can cut them down and then grow them back. It means they have to stay in place, as they are. That’s a fact, and it’s this fact that drives us.

Our expanding network of Guardians can now be found in over a dozen countries across five continents. Wherever there is a forest or a system worth monitoring, we are there. But, since climate change is happening right now, and we are experiencing extinction on a greater scale than ever before, our system isn't just about saving the rainforest. It’s about saving the sounds of the rainforest as they were, for posterity, so that we don’t completely miss out on what we’ve lost along the way.

And that's how our mission has evolved. We create technology and forge partnerships to fight deforestation and protect the world, but we also strive to prove that technology can have an impact and make important things possible, now and into the future, for generations to come.

Somewhere in a rainforest right now, technology from Rainforest Connection is listening, learning, and communicating ecosystem-saving information to those who need it most.

Topher White is founder & CEO of Rainforest Connection, a Silicon Valley-based non-profit that aims to preserve the world’s most precious ecosystems.