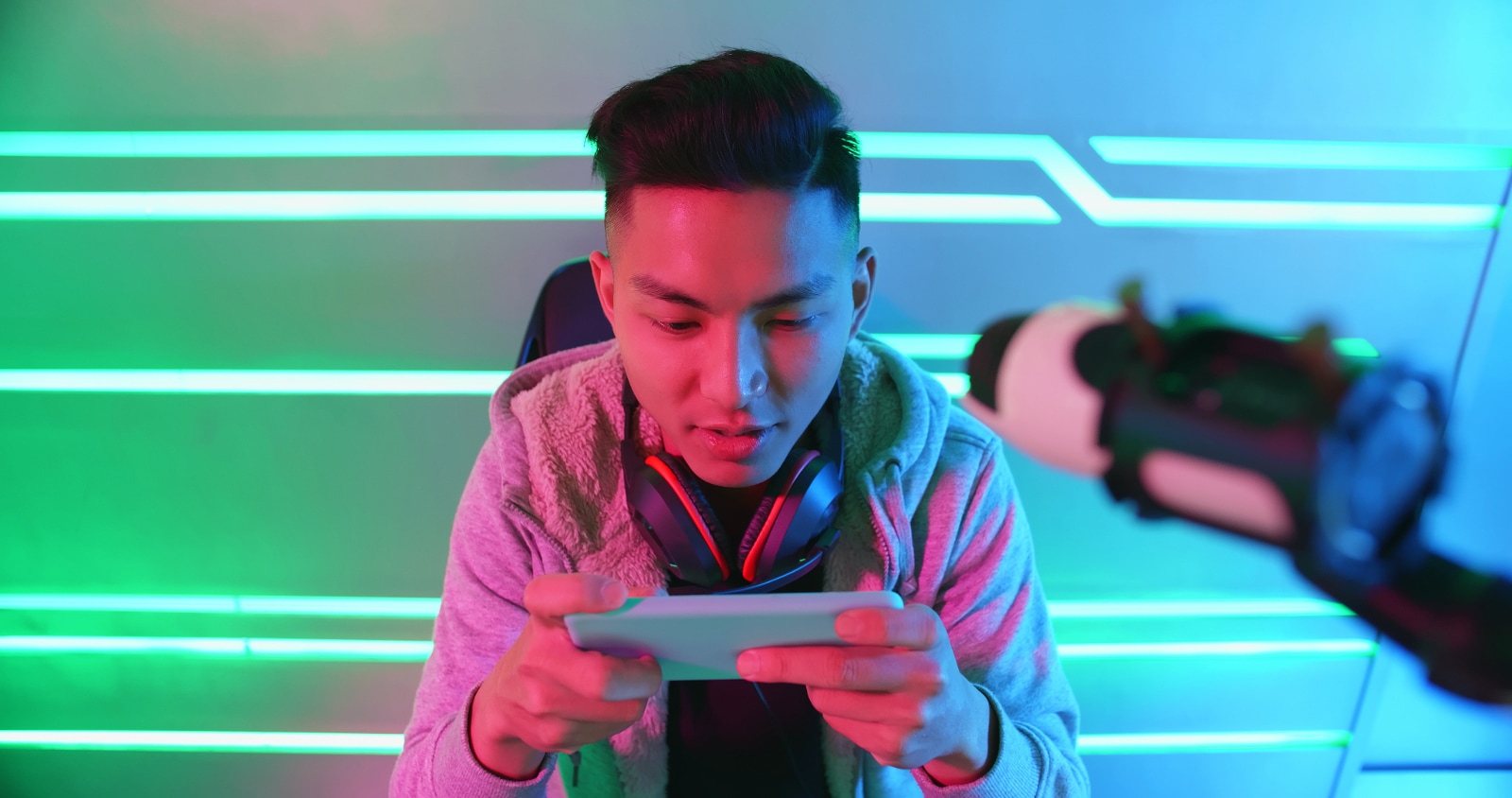 Despite the challenging circumstances, 2020 was a big year for gaming —particularly mobile gaming. Newzoo estimated that by the end of 2020, mobile game revenues will hit $76.7 billion, which is a 12 percent increase from 2019.

This means that mobile gaming alone will generate more annual revenue than the 2019 music and film industries combined: the global Box Office revenue was $42.5 billion while the global recorded music industry generated $20.2 billion in wholesale revenues.

By the end of 2021, we are expecting yet more mobile gaming growth. This is supported by the seven top trends listed below, as mobile gaming continues to establish itself as the dominant gaming platform.

Current trends show that gaming content is becoming device-agnostic. Users want to play very popular high-fidelity, multi-user games, such as Fortnite and PUBG, on their mobile devices as well as their consoles. However, they still expect similar quality.

This trend will continue to advance in 2021, supported by the ongoing 5G rollout and the emergence of cloud gaming, as well as more premium gaming experiences coming to mobile (more on that later).

Cross-platform play is also coming to casual games as well: Among Us was a massive cross-platform play success in 2020, even though it was launched in 2018. It is now official on Android, iOS, PC, Xbox, PlayStation, and most recently the Nintendo Switch. This brings us nicely onto the next trend…

Another area that is going to provide huge benefit to mobile gaming is the continued push of cloud gaming and the 5G rollout. The 2020 Arm-commissioned report from Newzoo,

The Evolution of Gaming Through 5G predicts that there will be one billion active 5G-ready smartphones by the end of 2022, that is 21.8 percent of all active smartphones worldwide. This growth is likely to develop throughout 2021, with an estimated half a billion users adopting the latest 5G-ready smartphones.

2020 was the year where mobile games became a lot more social. According to the Entertainment Software Association, 56 percent of frequent gamers played multiplayer games and spent an average of seven hours a week playing with others online. 55 percent said that this form of social gaming helped them stay connected with friends during the COVID-19 pandemic.

With the advancement of 5G making it easier than ever to stay connected no matter where users are located, expect the trend of social play to continue throughout 2021.

Gaming as a spectator sport

Esports have been growing for the last few years, with well-established tournaments and leagues featuring the best gamers in the world. However, 2020 really saw the advancement in gaming as a spectator sport. This is demonstrated by the huge esports revenues and size of the viewing audience.

According to Newzoo, global esports revenues will grow to $1.1 billion by the end of 2020. Moreover, there were 272 million occasional esports viewers and 223 million enthusiasts, with the total audience size growing to just under half a billion! China was the largest esports market in 2020, with Newzoo estimating revenues of $385.1 million.

The growth of mobile gaming has unlocked esports for emerging markets, such as countries in Asia, where titles like PUBG Mobile continue to grow in popularity. In fact, mobile esports enjoyed big growth in 2020, with these emerging markets at the forefront of this growth.

The growth of esports is likely to continue in 2021, with developers needing to develop their games differently with this spectator element in mind. For example, developers must consider Twitch integration as part of their games, with the streaming service being an important channel to view esports.

This integration is becoming such a hot topic that academic institutions have started to take notice. On the University of Utah’s yearly Games program show case, which in 2020 was streamed on Twitch, it highlighted projects that required adding Twitch integration into their gaming titles.

The ability of augmented reality (AR) to enhance the real-world environment of users through merging it with virtual characters and objects lends itself perfectly to mobile gaming. While AR-based gaming has still not properly kicked on from the Pokémon Go mobile game of 2016, we believe that the number of AR-based mobile games will continue to grow in 2021.

The combination of cloud and 5G means the real-time processing of data-intensive AR will be faster and smoother for users, while helping to bring more complex and immersive AR-based mobile gaming experiences.

The growth of AR is demonstrated by a recent report from VYNZ Research, which showed that the AR and VR market is estimated to generate revenues of $22.1 billion in 2020.

This growth is expected to continue in 2021, with the same report predicting that the market will reach $161.1 billion by 2025. The increasing penetration of AR capabilities on smartphones is noted as a significant contributor towards this growth.

Shift in focus towards ‘mobile-first’

In 2020, the games industry experienced a shift in focus towards being ‘mobile-first’.

Even game studios that traditionally focused on developing only PC and console games are putting their resources into developing more mobile titles. In 2021, we expect this shift to continue, as mobile gaming expands at a greater rate than PC and console.

In fact, some of the most popular games from PC and console are now available on mobile. These include the Grand Theft Auto series, Minecraft, Doom, the Final Fantasy series, Tomb Raider, Max Payne and Half-Life, to name just a few.

This is further supported by the data. According to Game Analytics, in Q1 of 2020 the number of mobile gamers grew from 1.2 billion people to 1.75 billion per month, which represents an increase of 46 percent.

Newzoo states that the number of mobile gamers in 2020 will peak at 2.6 billion, of which, 38 percent will pay for games. In fact, according to App Annie, consumers spent over $19 billion on mobile games in Q2 2020, representing the largest quarter yet.

This ‘mobile-first’ shift is being made possible by more powerful smartphones that can handle the complex compute workloads of mobile games that are usually experienced on PC and console. This brings us to the next point about how this is leading to the overall growth of premium gaming experiences on mobile.

The last few years have seen the mobile games culture move away from casual games, such as Candy Crush, to more hardcore-focused gaming experiences that traditionally take place on PC and console. These new breeds of hardcore mobile games include Fortnite, Honor of Kings and PUBG.

We are seeing AAA gaming properties going into mobile games and expect this trend to continue in 2021, as users seek these high-fidelity gaming experiences on mobile. Mihoyo has joined the AAA mobile gaming experience with its cross-platform title, Genshin Impact. The popular Gacha style game brought in over $245 million on mobile alone in 2020.

The high performance of the current generation of premium smartphones is lowering the barrier of entry to getting a AAA gaming experience to mobile. One of the most expensive parts of making a game is the art, for which Arm provides a series of Artist Best Practice Guides. In the past, game assets would need to be optimized specifically for mobile.

Now it is far more common to see assets from PC and Console gaming titles being used for mobile gaming titles in the same IP. A lot of the process of using these assets can be automated, then reviewed by art staff. This not only lowers the cost of the mobile version, but also helps to add a consistent experience to the title across the different platforms.

While the amount of hardcore-focused gaming experiences on mobile are increasing, casual gaming still makes up a significant percentage of mobile games. In fact, eight of the top ten gaming titles on mobile are casual. This proves that casual gaming is still hugely influential on mobile. In 2021, we believe that there will be a big market for education and children’s games on mobile.

Mainstream smartphones are often passed down from parents to children, with these devices being perfect for the more traditional casual gaming associated with mobile.

These ‘hand-me-down’ phones can keep older devices in the ecosystem for a long time, with this trend leading to many casual game developers focusing far more on the reach of their application, rather than the high graphical fidelity.

Games like Coin Master and Monster Strike along with mobile mainstays, such as Candy Crush and Pokémon Go, show that causal gaming can still compete with their flashier competition.

Most of the trends listed above are made possible by more performant and efficient architecture, products and solutions for systems on chip (SoCs) on mobile. Arm Mali GPUs are at the center

We are working with a variety of partners, such as Unity, Epic, Crytek, Google, King and Wargaming, to bring these greater mobile gaming experiences to life. Just like 2020, 2021 promises to be an exciting year for mobile gaming!

This article is also available as a downloadable PDF.