Fridge Gaming. Why? Because We Can 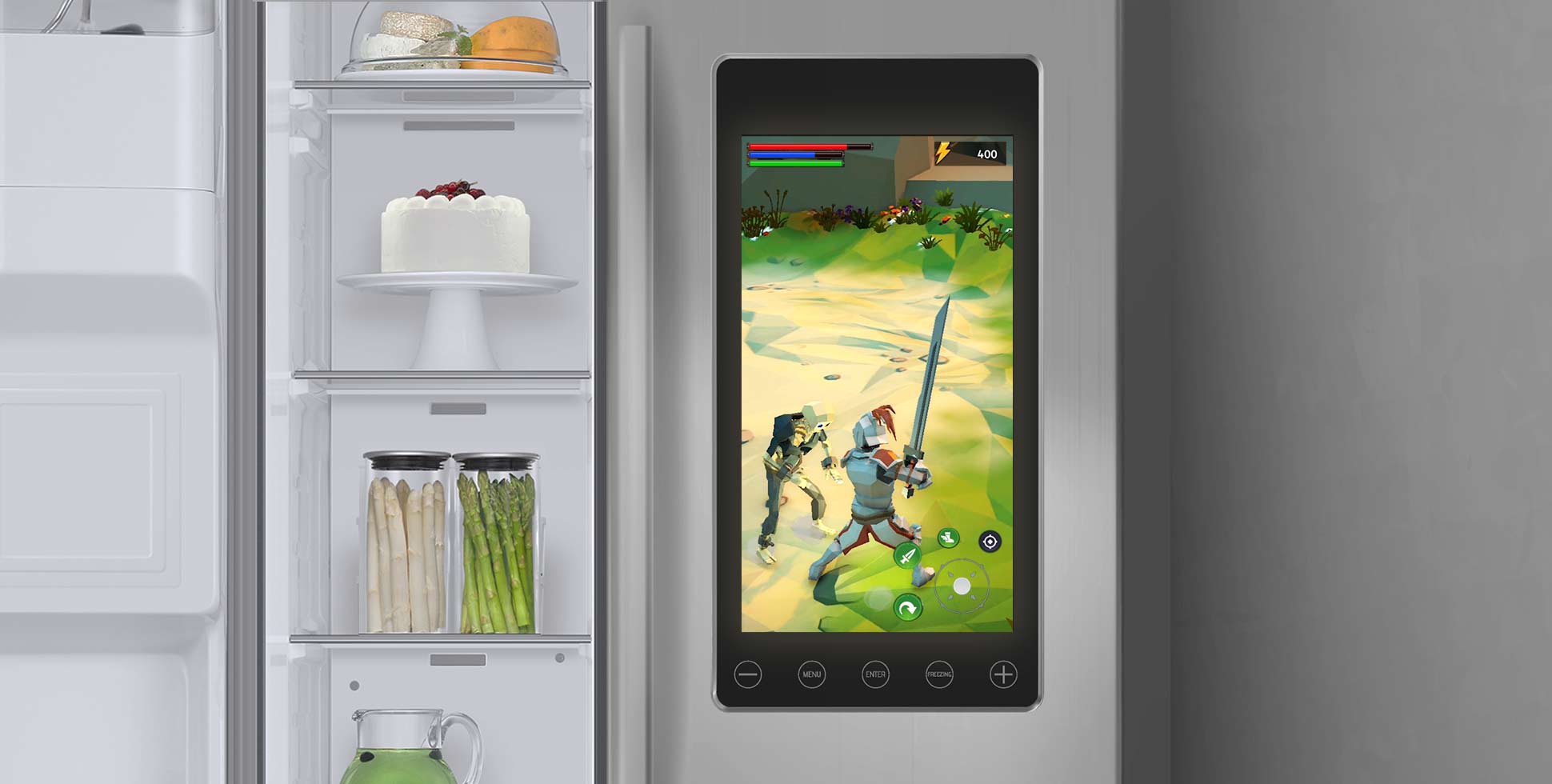 Most of us have dabbled in a bit of light mobile gaming at some point. Some of us are even competitive PC or console gamers. But could you be the first fridge gaming champion?

Yes, you read that correctly. Fridge gaming is a thing now, because we made it a thing. And we’re bringing a top-of-the-range Samsung Family Hub fridge freezer to Mobile World Congress (MWC) 2022 to demonstrate just how much fun fridge gaming can be.

When it comes to fridge gaming, those of us attending MWC will be ready to answer that all-important question: WHY?

And as the headline suggests, our first answer is going to be because we can. Thanks to advances in processing power, open-source software tools, graphics chips, artificial intelligence (AI) and screens, cross-platform computing will become an essential element of every device in the future. Furnaces, athletic shoes, sprinkler systems, and other items will all contain a seed of Arm-powered intelligence and, in most cases, an interface for humans to understand and control them better. The fridge is just one example.

Our second answer will be that if we don’t invent fridge gaming, someone will beat us to it. What makes smart devices compelling is how they unleash human creativity. Think about how TikTok and user-generated content have changed the multibillion-dollar entertainment industry. With screens and computing power becoming more pervasive, we will see an outpouring of new applications and games. A new way of gaming in a room where people gather is a natural fit.

And finally, we do it because we must. Smart devices will expand the surface attack for hackers exponentially. In conjunction with games like this we are also developing security technologies such as Morello, Memory Tagging Extension and Arm Confidential Compute to ensure your smart fridge is secure, whatever applications you choose to run on it.

Of course, we fully understand that fridge gaming might not be everyone’s cup of tea, but it serves to illustrate the different experiences that are possible across Arm-based smart devices. If you can play a game on a fridge, just think of all the other use cases that are possible, like streaming live cooking experiences directly to your fridge display.

Thanks to Arm’s ubiquitous technologies that feature in billions of smart devices worldwide, we can enable different immersive experiences across a range of smart devices.

The rise of AAA mobile gaming

Fridge gaming also shows the power and pervasiveness of Arm Mali GPUs. The Mali GPU features across a range of mobile devices, making it the industry-leading GPU worldwide, with over one billion shipped by our partners during the past year.

Samsung’s Galaxy S21 smartphones—which will be showcased on the MWC demo booth—utilize the latest Exynos 2100 system on chip (SoC) built on Arm Cortex-X, Cortex-A, and Mali GPU technologies. Looking ahead to the next generation of smartphones, the latest Armv9 CPUs and Arm Mali-G710 GPU are featured in MediaTek’s Dimensity 9000, which is set to power next-gen gaming experiences and features, like ray tracing, on mobile.

Mali-G710 is Arm’s highest performing GPU to date, with its adoption in the Dimensity 9000 enabling a 35 percent uplift in gaming performance and 60 percent power efficiency boost compared to current Android flagship devices for longer gameplay. Mobile devices with the Dimensity 9000 chipset are set to come to market soon and we can’t wait to see the gaming performance in action.

Advances like this are part of the momentum turning gaming into a mobile-first market. A recent Arm-commissioned report from Newzoo showed how the most popular AAA gaming titles, like PUBG, Fortnite, Call of Duty and Honor of Kings, that all first launched on PC and Console are now widely available on mobile. In fact, AAA gaming on mobile has grown rapidly across all core markets worldwide, making up 70 percent of the overall gaming market in China, 33 percent in North America, and 37 percent in Europe.

The game itself is an internal Arm production called “The Amazing Adventures of Dr. Arm”. It’s a medieval action-adventure role-playing game where a player fights zombies, skeletons, and wraiths. Perfect fridge gaming material.

“Dr. Arm” hails from the Mali Manga comics that Arm published for game developers to explain the inner workings of mobile GPUs in manga form. Due to the popularity of both comics, we chose to bring “Dr. Arm” to life through this game for MWC.

Try fridge gaming for yourself at MWC 2022

The Arm booth at MWC 2022 will recreate a home environment complete with Arm-based smartphones, tablets, a Windows on Arm (WoA) laptop, a games console, a Smart TV and a brand-new smart fridge complete with a Full HD tablet-like display. People can transpose the gameplay to the fridge display via Screenshare which is available across all Samsung mobile devices and Smart TVs. The gameplay can be controlled not just on the mobile device but on the fridge display too.

Thanks to the proven performance of Arm-based mobile devices and the pervasiveness of our processor designs across the world’s smart devices, people are able to enjoy a seamless gaming experience no matter what device they’re using. Where there’s gaming there’s Arm, no matter what device is being used!

If you can, come down to Arm’s stand at MWC and give fridge gaming a go. With Arm technology at the heart of current and future smart devices, the possibilities are endless!