Arm Techcon: At the Heart of the Technology World 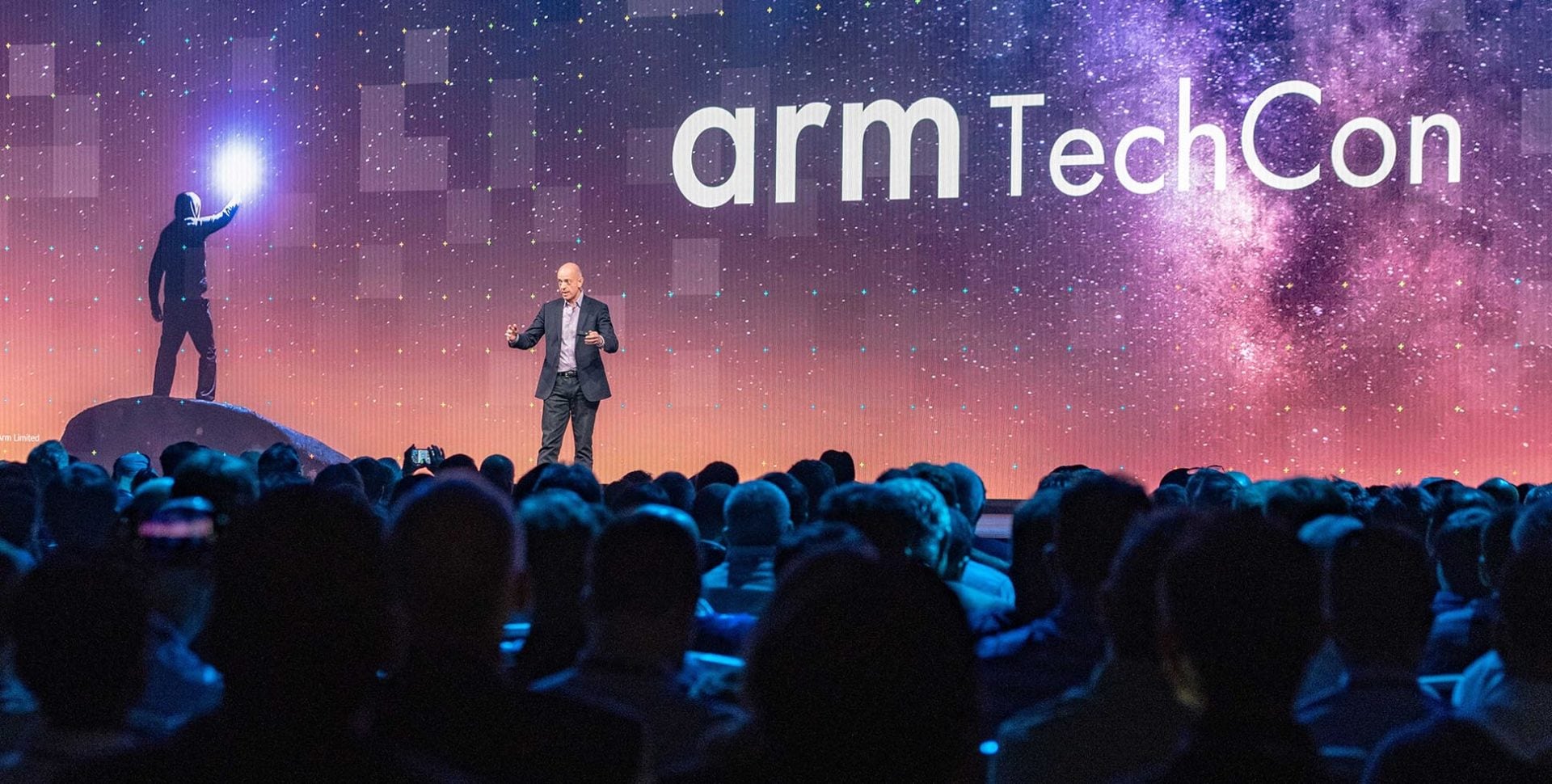 On a stage in the Santa Clara Convention Center, Arm chairman Sir Robin Saxby is inaugurating the first Arm Developers’ Conference (DevCon) with a keynote titled ‘The Evolution of the Digital World’. Twenty years from now, he predicts, we’ll have technologies that improve lives in the most fundamental of ways: health monitoring, better patient care and drug delivery, and nanotechnologies that can be used inside our bodies.

Yet despite 98 per cent of cell phones containing at least one Arm processor, more than half of the 2,032 attendees have never used Arm technology. Many outside the mobile industry had no idea why they would want to. Few know how to write code for Arm – let alone where to buy an Arm processor.

Nevertheless, the unveiling of the Cortex-M3 in 2004 and groundbreaking Cortex-A8 in 2005 – the latter becomes the blueprint for the smartphone revolution – are lightbulb moments for the industry and secure the annual event’s position as a launchpad for the next big step in the future of Arm technology.

In the years since, Arm TechCon (rebranded from DevCon in 2009) has served up countless lightbulb moments in areas such as embedded design, automotive, high-performance computing, artificial intelligence (AI), infrastructure and, of course, mobile.

Arm TechCon’s formative years coincided with a time of tremendous transformation for the mobile industry, with the rollout of 3G driving the move away from voice-centric cell phones towards early smartphones capable of ‘full’ Internet access.

Little wonder, then, that many of the keynotes and sessions in the mid to late noughties examined the juncture of mobile computing and the Internet. In 2004, Broadcom co-founder Henry Samueli described the technology and business trends that would fuel the move towards high-speed cellular data, a talk that laid the groundwork for the rollout of 4G cellular infrastructure.

And in 2007, Marvell, Qualcomm, Samsung and Texas Instruments joined Arm for a session on ‘mobile computing and the versatility of the Internet’, while workshops that year saw attendees (many clutching brand new, 1st-gen iPhones) explore the technical requirements of an industry now on the hook to deliver its promise of a truly connected mobile Internet experience.

In 2011, the company that helped ignite the mobile phone revolution with power-efficient 32-bit processors stunned the world when Arm co-founder and CTO Mike Muller announced the first 64-bit implementation of the Arm architecture, Armv8.

With this, Arm signaled that the future of compute would be as much about performance as it would be about power efficiency and that the Arm architecture had broad utility in system designs of all types.

The following year, Arm launched the Arm Cortex-A50 processor series, based on Armv8. At the same time, Arm, Red Hat, and Applied Micro Circuits announced they would collaborate on 64-bit development; a watershed moment in high-performance computing.

And in 2015, in answer to an ecosystem grappling for ways to design more efficiently and cost-effectively, Arm used the 2015 Arm TechCon event to announce free access to the Cortex-M0 processor for embedded design through its Arm DesignStart program, taking to a new level the power of Arm’s embedded technology in the exploding world of the Internet of things (IoT).

Aside from the big product announcements, the event serves to benchmark the fundamental values underpinning the Arm ecosystem against the pace of incredible technological change. One of the emerging themes Warren East touched upon back in 2008 was how the Internet was not only changing society but also changing how we design systems and silicon. Sound familiar? Today, we host sessions on how best to optimize for even more specialized workloads such as artificial intelligence (AI). East’s “one size does not fit all” message 11 years ago very much holds true today.

Security, too, has remained an evolving theme since Valicore Techologies (now Integrity Security Services) CEO Greg Powell reinforced the importance of the trusted hardware environment at DevCon 2005. Renowned ‘White Hat’ hacker Dr. Charlie Miller – who famously hacked a Jeep and drove it into a ditch – told the 2016 Arm TechCon audience that the industry needed to band together to solve the problem of security in automobiles as the move toward autonomous driving accelerates.

That message of end-to-end security has only grown stronger over the years, culminating in the launch of the Arm Security Manifesto and Arm Platform Security Architecture (PSA) by Arm CEO Simon Segars in 2017. In doing so, Segars challenged the industry to rethink the way it designs intelligent devices and unite in a secure future.

Dr. Charlie Miller returns to the 2019 event and will be demonstrating just how vulnerable your computer systems are, while making a passionate plea for consumers and companies to treat cybersecurity as a top priority.

And while the application of Arm technology within AI and the IoT had been hinted at many times at Arm TechCon, the full potential of Arm’s role was affirmed in Softbank CEO and new Arm owner Masayoshi Son’s watershed keynote in 2016, in which he called AI and the IoT the ‘keys to human evolution’, citing his expectation for one trillion connected IoT devices to be produced by 2035.

But Arm TechCon has always been more than the sum of its keynotes. Repeat attendees talk about the buzz of energy and inspiration that comes from bringing together an ecosystem of innovators at the top of their game, in one place and at one time, to explore how Arm technology can be used to architect the future.

In 2004, a majority of developers had never used Arm, didn’t know how to write code for the architecture or where to buy Arm-based silicon. Today, Arm technologies proliferate in all aspects of compute, from the tiniest, most power-sensitive edge devices all the way into the data center at the beating heart of the cloud.

Notably, we have already succeeded in Saxby’s twenty-year vision: Arm powered devices are improving lives, providing health monitoring and improving patient care amongst very many more human-centric functions. We are now at the very heart of the ‘technology world’.

All along the way, Arm TechCon has consistently delivered the latest in hardware and software technology trends, products and training from a global ecosystem of innovators. It’s no stretch to say that many of today’s killer applications and solutions were inspired or more directly launched as a result of the event.

The show has grown in size, expanded its technology themes and continued to illuminate industry inflection points, while retaining its values and maintaining a vibrant spirit of innovation and camaraderie. All of this has happened in the technological equivalent of a blink of the eye – 15 years.

As we enter a new era of compute – a topic that will be explored in detail by Simon Segars in this year’s keynote – just imagine what the next 15 years might deliver.

Arm TechCon 2019 is an immersive three-day experience with visionary keynotes from top industry executives and innovators, over seventy technical sessions and workshops and hands-on innovation on the Expo floor. Ready to join in? Register here.